The only sake brewery in the Fuji-Goko region

Delicate yet dynamic, elegant yet majestic. Mount Fuji, a sacred mountain, has been an object of worship since ancient times because people have felt a sense of awe and mystery from its beauty and splendor even though it is a volcano. The Ide Jyozoten in Funatsu, Fujikawaguchiko-machi, Yamanashi Prefecture, is the only sake brewery in the Fuji-Goko region, that brews sake with subterranean water from Mount Fuji. The story of the brewery begins in the Edo period around 1700 with soy sauce brewing, and it is in 1850 at the end of the Edo period that Yogoemon Ide, the 16th generation president of the brewery, decided to also start brewing sake. Located at an altitude of 850 meters near an abundant and limpid spring water source of Mount Fuji the brewery also benefits from a cool climate which is ideal for sake brewing. The company is known for its sake, “Kai no Kaiun”.

The 21st generation president of the brewery, Yogoemon Ide, describes the characteristics & benefits of the water they use for brewing. “The water pumped up at an altitude of around 1,100 meters, at this altitude the water is very clean so we can use it without any additional filtering. It is said that the rain and meltwater that falls on Mount Fuji soaks into the ground and is slowly and naturally filtered over a period of about 80 years. The water is low in iron for a volcanic water and contains a good balance of various minerals, making it easy to brew sake.” The water, which is cool and pure at 12 degrees Celsius throughout the year, is used not only for brewing, but also to wash the rice, to clean the tools & bottles and split the water. “Sake making begins and ends with washing. The basic idea is to keep everything clean and free from bacteria,” he says, explaining the importance of water in sake brewing. 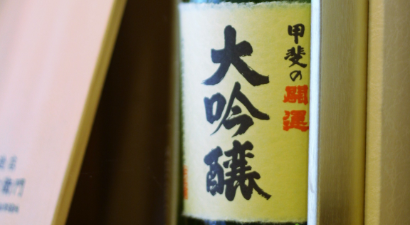 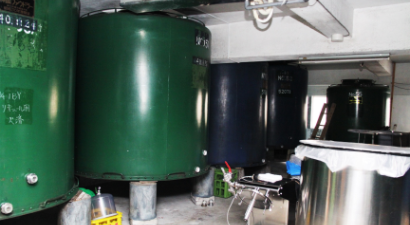 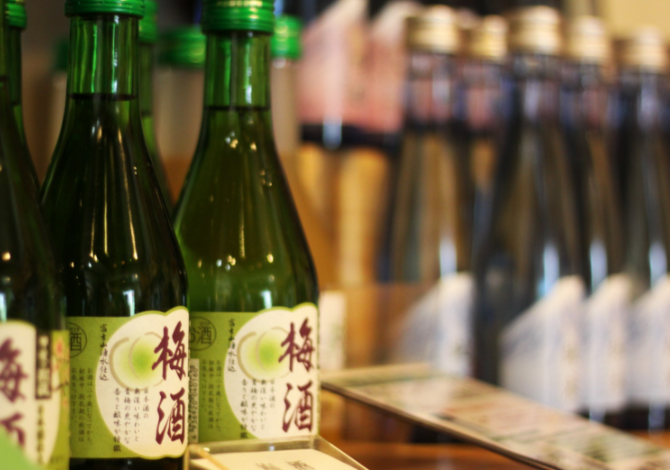 Focusing on the “next” step

The brewery does not use a seasonal Toji (master brewer); instead, employees serve as Toji. “Even if a Toji retires, it is important to always train the next person who can take over the job and pass on the skills to the next generation, so that the skills of the masters are preserved in the brewery and shared by all the staff. Local sake varies depending on the taste of the region and the food. This is because it is tailored to the tastes of people who live in the area. It is only because we live here that we can learn about the local water and rice and leverage it for sake brewing.”

The town of Fujikawaguchiko is also a difficult area to grow rice due to the cold climate and the nature of the soil. For this reason, the brewery purchases sake rice from all over the country, but in 1995, with the desire to make sake using local rice, the brewery started asking local farmers to grow rice. After much trial and error, the first sake made with rice from the Fuji Hokuroku region was born in 2003. President Ide says happily, “Although it only accounts for a small portion of the rice we use, I always wanted to make sake using rice from local producers.” Even though it is a difficult challenge, the local sake brewery is always looking ahead to the “next step” and continues to make steady efforts.

“Kai no Kaiun,” which has won numerous awards

The brewery offers seven lines of sake for a total of around 50 SKUs. Among them, the brewery’s flagship product, “Kai no Kaiun Daiginjo”, has won many awards, including three awards at the National New Breweries Competition, the Nanbu Toji Home-brewed Sake Competition, and the Tokyo Regional Taxation Bureau’s Sake Competition (Ginjo category). It is characterized by its clean taste and gorgeous ginjo aroma, making it a perfect match for any meal. In addition, “Kai no Kaiun Yukigeryu” focuses on local production for local consumption. It is made from 100% Hitogokochi rice, which is carefully grown by local rice farmers from the prefecture. This sake is characterized by its dry and refreshing mouthfeel and booming ginjo aroma. The label was written by the late Kan’O Watanabe, a calligrapher from the prefecture, and was created by people who love their hometown. In addition to sake, they also offer unique products such as plum wine made from sake instead of the usual shochu, and sake ice cream.

From 2020, the brewery is also taking on the challenge of producing whiskey. The goal is to attract new customers and gain a foothold to further promote the brewery’s sake. “I was interested in the shelf life of distilled liquors and how the taste changes with storaging. Alcoholic beverages around the world can be broadly classified into brewed liquors and distilled liquors, each of which is completely different in terms of its region of origin, historical background, taste and properties. If we can produce both brewed sake, which we have nurtured for many years, and distilled liquor, which has a completely different flavor, we will be able to offer a wider range of products to a variety of customers.”

Mount Fuji was registered as a World Heritage Site in 2013, and the number of tourists from overseas has been increasing ever since. More than 10,000 foreign tourists, mainly from Europe and the United States, visit the brewery every year to tour and enjoy sake tasting. The brewery shows how “sake”, which is becoming increasingly popular overseas, is created through a complex process that is different from beer and wine, and conveys its depth and flavor. “Our mission as a sake brewery is to continue brewing quality sake. We believe that our contribution to society is to continue to produce high-quality sake that is rooted in the local community and becomes a treasure for the community, and that the people who grew up there are proud of. In order to achieve this, we need to do good PR at opportune times to let people know what sake is, to let them know the taste of sake and the various interesting things surrounding sake, and to get people interested in the production and taste of sake. We believe that this is the original mission of the brewery, and we hope that many more people will visit and tour the brewery in the future.”