Takenoi Shuzo in Minowa, Takane-cho, Hokuto City, Yamanashi Prefecture, is located at the southern foot of the majestic Yatsugatake Mountain Range. The Sanbunichi Yusui Water Spring is part of the Yatsugatake Plateau Spring Group and is recognized as one of the 100 best springs in Japan making it a very touristic attraction. The brewery was founded by Buzaemon Shimizu in 1865 and has been brewing sake using subterranean water from the Yatsugatake Mountains. The name “武の井（Takenoi）” is derived from the founder’s name and the “井” of the well where good water gushes out. The sixth-generation brewer, President Motoaki Shimizu, explains the appeal of the water, saying, “We only know the water here, but it is often called mellow water”.

For many years, the brewery has mainly produced Futsu-shu (ordinary sake) and shochu for daily use, but now it is strengthening its lineup by launching new value-added products in addition to those. Senior Managing Director Koichiro (President Motoaki’s cousin) who studied brewing at Tokyo University of Agriculture, is the sake brewer, while his younger brother Managing Director Daisuke, who also studied at the university, is the shochu brewer.

One of the special features of the brewery is the use of Tokyo University of Agriculture’s flower yeast in their production process. This yeast comes from flowers that bloom in nature and which are isolated and cultivated by the Liquor Science Laboratory of the Department of Brewing, Junior College of Tokyo University of Agriculture (named at that time). It is said to have the power to amplify the traditional taste and characteristic aromas present in sake. 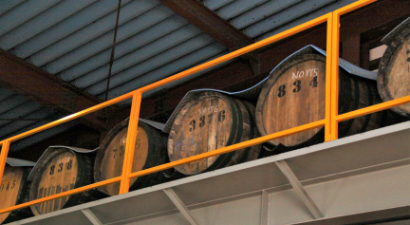 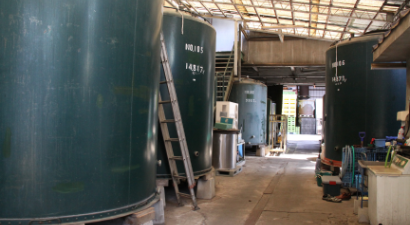 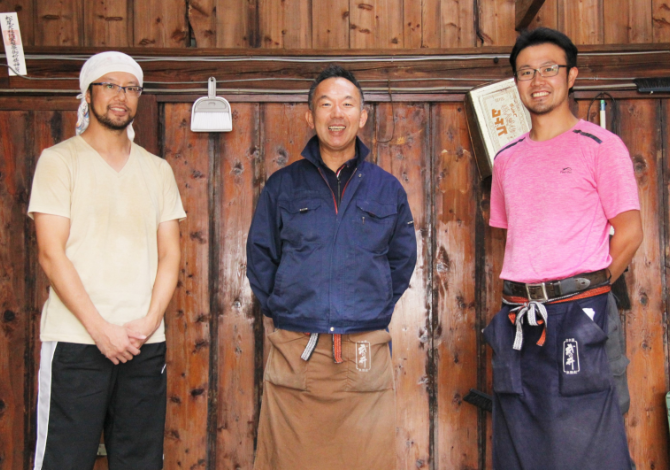 The birth of a new brand

青煌 (Seikou), a new brand of sake launched in 2007, is brewed using vine rose yeast. It is characterized by a clean and refreshing taste, and is recommended to be drunk chilled. The name of the product is a combination of “青 (blue),” which evokes the image of clean water, and “煌 (gleam),” with the hope that the sake as a whole will shine as brightly as the other sakes,” says Senior Managing Director Koichiro. The company uses different types of rice grown in different parts of the country to brew sake that makes the most of the flavor of each rice, and offers a variety of products such as “Seikou Junmai Ginjo Omachi,” “Seikou Junmai Daiginjo Aiyama,” and “Seikou Junmai Hitogokochi”.

The brewery sells its products exclusively at about 30 sake retailers nationwide and participates in various events. In 2018 and 2019, they attended an event organized by Hidetoshi Nakata, “Craft Sake Week”. In 2019, their sake was also served in the ANA Lounge at Haneda Airport in conjunction with the ANA Group’s regional revitalization program, “Tastes of JAPAN by ANA – Explore the regions-“, for a certain period of time. President Motoaki said, “This product has only been around for more than ten years. We are still in the process of evolving” but he is confident that the product will make further progress in the future, saying, “It’s just the beginning”.

The brewery also launched the “Takenoi Four Seasons Series” of junmai ginjo sake in 2017. It is a seasonal product made with different seasonal flower yeasts, such as camellia, cherry blossom, sunflower, and cosmos, and is sold for a limited time only. In 2020, the brewery released “Takenoi Junmai Sake Hitogokochi”. The sake is brewed using 100% Hitogokochi, a sake rice grown with great care by farmers in the city and the famous water of Yatsugatake, and is filled with love for the local area.

Authentic shochu made with care

Along with sake, the mainstay of the Takenoi Shuzo is the “Takenoi”, “Yatsugatake no Mai”, and “Taiyo no Megumi” series of authentic shochu liqueurs in particular the long-term oak barrel-aged type which is aged for seven years to give it a deeper flavor. On the other hand, the traditional country style is distilled using a single distillation apparatus under normal pressure, following a 100-year old recipe that requires a lot of time and effort. Managing Director Daisuke says, “Ordinary pressure distillation, which has a wider range of distillation temperatures, allows us to extract more component, so we can enjoy a more complex and dense flavor”. As with sake, the shochu brewed with the floral yeast from the Tokyo University of Agriculture is characterized by its floral and deep flavor. “Junmai Hanatare” is made by extracting only the first batch of raw sake from the distillation process, called ‘hatsu-dare’. “SHOCHU” is a rice shochu that is ideal for making medicinal sake and fruit wine.

Also, the “Taiyo no Megumi” series is consist of “Taiyo to Shakunage no Megumi”, whichi is a decompression distillation series that uses rhododendron flower yeast, “Taiyo to Himawari no Megumi”, with sunflower flower yeast, and “Taiyo to Abelia no Megumi” with abelia flower yeast. It has a light, refreshing taste and a gorgeous aroma.
The brewery sales method varies depending on the person in charge and the product, but for specific class name sake, they take part in an event called “Sake no kai”. By connecting with sake retailers who share similar views on sake, the brewery is able to accurately convey its thoughts on the brand to the consumers. President Motoaki says, “Sake retailers are becoming increasingly ambitious and constantly on the look out for innovative products and brands so we made this event our priority”.

Takenoi Shuzo, a traditional brewery at the southern foot of the Yatsugatake Mountains, has taken a new step toward the future with a wide range of new and historical products. “We will continue to take care of the brewery and pass it down to the next generation while delighting our customers with original product experiences” he said with confidence.